skip to main content
About Madras
Welcome to the Eagles' Nest! 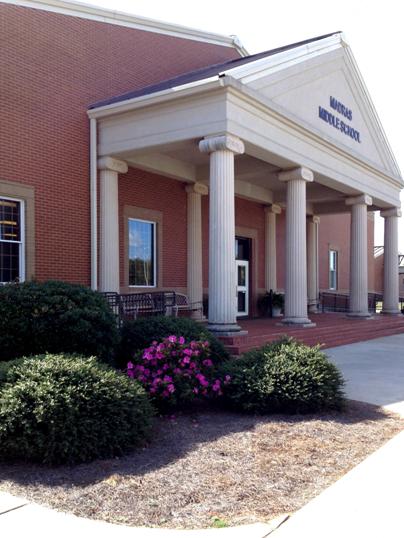 Every Child, Every Chance, Every Day

Madras Middle School, a suburban public school, is located in Newnan, Georgia 39 miles southwest of Atlanta. It is the largest of six middle schools in the Coweta County School System. It opened in 1999 and currently has an enrollment of 1121 students in grades six, seven, and eight as the county continues to experience rapid growth. The 110,878 square foot brick building is composed of three grade level halls, a connections wing, gymnasium with band and chorus facilities, cafeteria, and office areas.Madras Middle School was one of the first schools in the state of Georgia to be paid for entirely from SPLOST funds. Principal Carolyn Roberts was responsible for opening the school in 1998 and also served as principal for Northgate Middle School which was housed in the same building with Northgate High School. When Madras Middle School was completed, Northgate Middle School was transformed into the current high school.Madras has been designated as a Distinguished School by the Georgia Department of Education and has maintained a reputation for excellence in education as a part of the Coweta County School System. The school consistently met annual yearly progress (AYP) under No Child Left Behind (NCLB), and since the implementation of the College and Career Readiness Performance Index (CCRPI), students have performed above the state and district mean each year as they continue to demonstrate high standards in academics. The school received 87.2 on the most recent CCRPI rating along with 5 stars (out of 5) on its climate rating and 5 stars (out of 5) on financial efficiency.Madras Middle School is a Silver Stem School and was honored as a 2011 Georgia Association of Middle School Principals Effective Middle School. The school also received the Red Ribbon Week Campaign Award from the Governor’s Office in 2017, 2018, and was the overall state winner in 2019.We have been named a “Beating the Odds’” school for 5 consecutive years which means we have performed higher than schools that are similar to ours and additionally Madras was also honored this year with the Bronze Award from the Governor's Office of Student Achievement for Greatest Gains.CCRPI Score: 87.2Climate Rating: 5 Stars

Welcome to the SchoolBlocks
self-guided tour!

The most common question we receive is, how is SchoolBlocks inspired by Pinterest? SchoolBlocks eliminates navigation bars and uses a block style layout that’s similar to Pinterest. It creates a unique and engaging browsing experience, optimizes for mobile and removes a lot of navigational complexity.

Please click on the red plus signs found on this page to learn more about specific features.